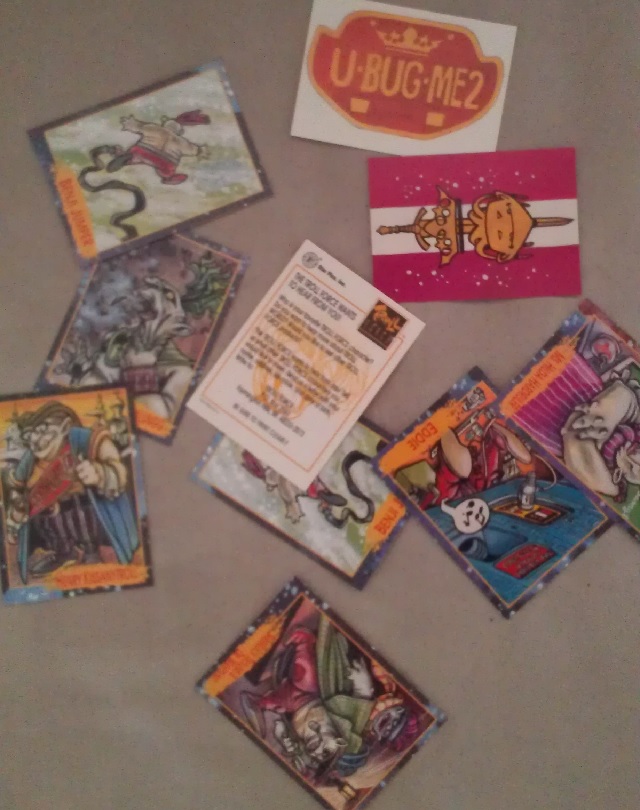 It turns out that it’s just some doodles of space creatures and a bunch of anemic troll puns. I realize a grown adult from the future is not the intended audience, but the intended audience is not exactly equipped to speak for themselves, because anybody who collected Troll Force cards had to have first collected at least one extra chromosome.

As best as I can tell, this franchise doesn’t appear to exist outside of trading cards, which makes it even more improbable that somebody would choose to allocate a portion of their allowance to Troll Force cards. As hard as it is to imagine anyone purchasing a pack of Growing Pains cards, for example, there had to have been at least a few Alan Thicke fans willing to take a flyer on a pack or two, and maybe even talk their friends into buying a pack. Before you know it everyone on the school playground is wheeling and dealing Growing Pains cards, and a huge fight breaks out over a rookie Chrissy Seaver card, and all the teachers are standing around trying to figure out where they fucked up so badly.

This scenario could never happen with Troll Force cards because there’s no such thing as a fan of nonspecific trolls. Maybe somebody with a PhD in Scandinavian folklore would buy a pack, but there’s no way they would ever have a spare quarter in disposable income. I’m willing to believe that I’m the first person to ever intentionally purchase a pack of Troll Force cards, or at least the first person who had the mental acuity to not confuse them with my apple sauce and accidently eat them. 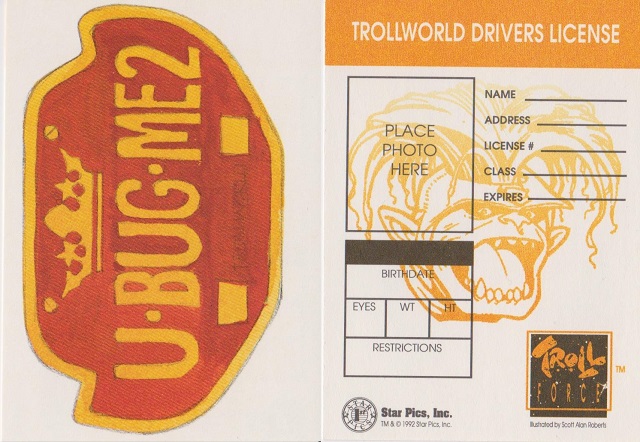 I am really not sure what to make of this “Trollworld Drivers [sic] License.” Did they really expect this to be filled out? Where would you get a photo that small in 1992? How the hell would a child know what to put for Restrictions besides “I am nine years old and can’t fucking drive.” Jeers also go to the Address field, which is infuriatingly small. This is endemic in real-world applications, too, where they expect you to cram like forty characters into an inch of real estate. Tell you what, if you only give me space for eight characters, my address is going to be “fuck you” nine out of ten times. 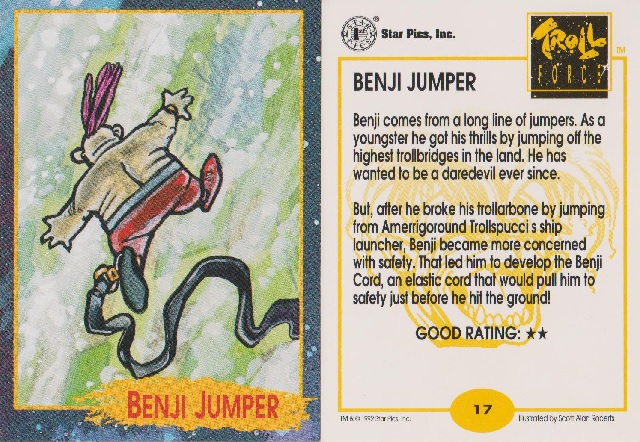 I received two “Benji Jumpers” in this pack, which means I can show the front and back at the same time in one scan. It also means that I’m in the trading Troll Force cards business, if you have any duplicates of a troll I need. In the meantime, you don’t need to actually read the back of the card, but please be assured that it’s the finest example of world-building since the Book of Genesis.

This card is appended with a GOOD RATING, which I at first assumed was characterizing its merit, and that there might also be GREAT RATINGs, MIDDLING RATINGs, and BAD RATINGs. But I noticed there are other trolls with EVIL RATINGS, which implies that it’s actually some sort of moral evaluation. This dichotomy is how toy lines defined their contributions to the warring factions of one’s childhood bedroom, which were everlasting dueling battlegrounds between a good and an evil kingdom, spanning every toy line in one’s possession and incorporating titular leaders and their secret puppet masters, double-crossings, backstairs handshake deals, revolutions, and more than a few mass genocides. It wasn’t really necessary to follow the two-dimensional allegiances outlined by toy manufacturers, or their crappy lore, but I do appreciate that an effort was made, even in the case of a trading card series which I am hereby awarding a five-star SHITTY RATING.