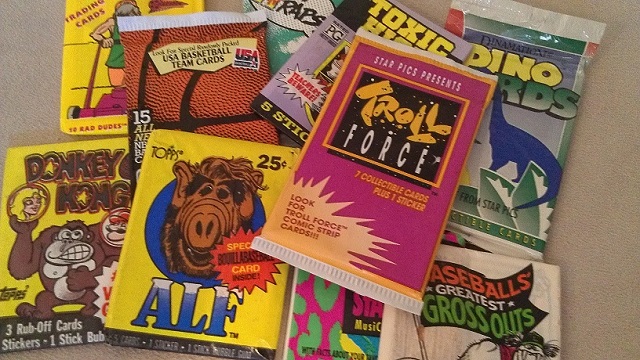 Every once in a while I see something that reminds me that I have a website. Usually I can safely ignore these feelings of guilt and neglect, but sometimes a sense of profound obligation overwhelms me. In Brooklyn I saw a store selling tons of trading cards from the ’80s and ’90s, which are provably worthless. Factoring in inflation, the price of Alf cards, for example, are actually cheaper now than they were in 1987. It seemed like a shrewd little investment.

There was a voice in my head telling me to ignore these cards, to grow up, that we had to go get brunch. But I ignored my girlfriend and rifled through the boxes upon boxes of trading cards, purchasing ten packs that called out to me most privately. This took a great deal of time, and an even greater measure of focus, having to tune out complaints of hunger pains and various cruel threats. I told her we might need to cancel brunch altogether and just have an early brinner.

In this special series, I will examine these trading cards pack by pack, highlighting a couple cards from each for closer examination. Most of these cards come from the very early ’90s, unless they contain bubble gum, in which case they are from the ’80s. There must have been a specific day somebody over at Topps realized that including a comestible in a pack of trading cards was disgusting. This gum came off the assembly line stale, and by the time the sticks wound up in your hands they were in a state of rigor mortis, no more chewable than a butter knife. Today in 2013 they have engendered an evolved civilization of extremophiles who know only darkness and worship of their mighty god Alf. But I’m pleased to report that at least now the gum has a little flavor.

Dinamation is not afraid to bust the long-standing myth “Tyrannosaurus preyed only on Triceratops,” which has been a pervasive misconception ever since Dinamation came up with it as a pretense to draw a bunch of tyrannosaurs. This would be like busting a myth that Native Americans invented Ultimate Frisbee—they didn’t, nobody believes they did, and nobody gives a shit either way. You morons don’t get credit for debunking a myth you just made up for your shitty dinosaur cards.

Still, I would be alright with this little trick if the corresponding illustration didn’t look so depressing. I’m not sure what dinosaur the T-rexes are “preying” on, exactly, but I’m pretty sure it’s winning. This is despite the fact that he’s outnumbered two-to-one, that he looks like a cancerous armadillo, and that the T-rexes are apparently using the Big Head code from NBA Jam. I would like to see somebody bust the myth that Dinamation’s artists preyed only on crack pipes.

Wait, what is going on the back of this card? I see where Rhamphorhynchus lived, that he enjoys fish, and that he flies like an eagle, or maybe weighs as much as an eagle. But what is that imbecile doing on a bicycle? Does this dinosaur fly as fast as a cycling plainclothes Indiana Jones, assuming he’s standing up while his girlfriend rides the handlebars? Or is that how large he was? The size of two assholes on a Schwinn? Since when is this an acceptable point of reference?

Because there’s no explanation for this picture, I am forced to assume the Dinamation art director had the following conversation with his illustrator:

“I need you to draw something to depict how large Rhamphorhynchus was. Numbers don’t exist, so we have no way of describing his measurements.”

“Uh, OK. I could just draw him next to person. Kind of show you how large he was compared to the average adult human.”

“Hmm. That’s good, but not great. What if he was riding a bicycle? But he’s got to be standing up, not sitting around like a pansy.”

“Huh? That might complicate the picture a little bit. I think we need to focus on the dinosaur.”

“You’re right. Have a woman riding the handlebars. Yeah, she’s sort of holding her hat with one hand, having the time of her life. And Rhamphorhynchus is close behind, hunting them down!”