I’ve been walking past this sign for years and some days it’s all I can think about: 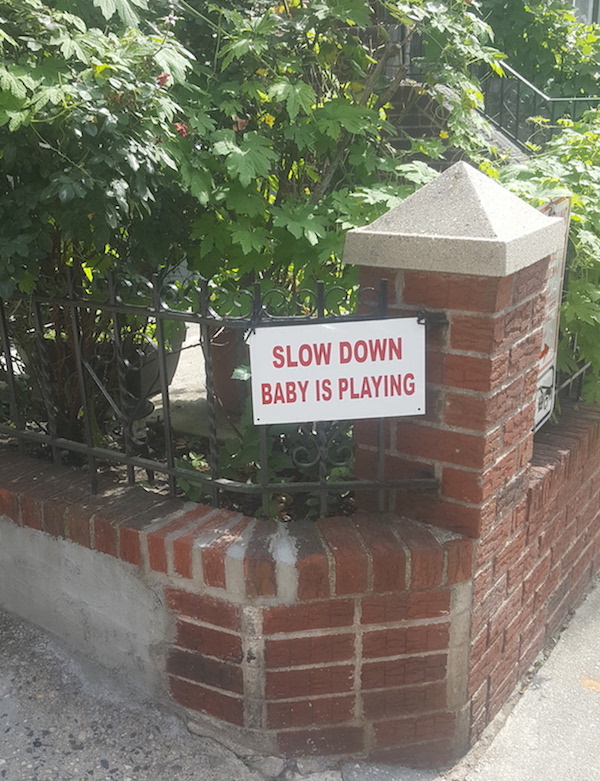 Too often I find myself zoning out during conversations to focus on this riddle, and suddenly the next thing I remember is my friend’s worry, her tearful eyes searching mine as she breathlessly whispers, “Where were you just now?” Then there are the nights in which sleep does not visit, in which I lie awake counting the atoms in my ceiling paint while undiscovered mathematical proofs flit by at the edges of my field of vision.

Let me disabuse you of the notion that there is a dependent living at this residence. I’ve never seen a baby here, either playing or sleeping or even just relaxing with a box of apple juice, and I’ve been passing this house long enough for any baby to now be in grade school, well on its way to a master’s degree in playing.

I am happy to allow, as you assuredly are, that the baby is simply a pretense for encouraging slower driving. Maybe it is unethical to lie about a baby, but when confronted with the disturbance of neighborhood traffic, one must resort to all manner of chicanery—phantom babies, mythical speed bumps, School Zones. In my childhood neighborhood there is still to this day a sign that requests slower driving in consideration for an alleged “deaf child,” who is either well into his thirties or who was ran over by a truck decades ago. The reality is that you can’t be arrested for lying about a baby as long as they don’t also make an appearance on your 1040, and I’m not certain there’s been any fallout to my anonymous tips to the FBI.

This “slow neighborhood traffic” theory is complicated by examining the orientation of the sign in relationship to the street: 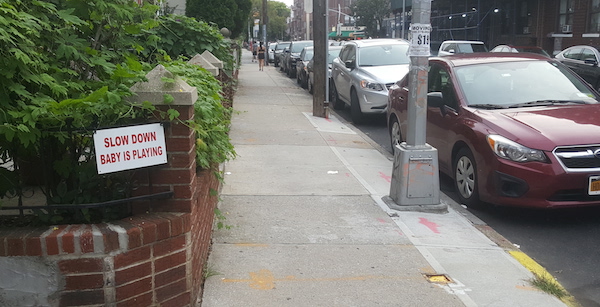 It’s a one-way thoroughfare, and the sign is clearly facing away from thru traffic. One must confront the reality that the sign’s audience is not neighborhood traffic at all, but either pedestrians or those few vehicles entering this person’s own driveway—which are each in their own way troubling possibilities. I simply can’t abide by the idea that this request is being made to pedestrians. Is the baby disturbed by joggers? You live in New York, baby, fuck you. You slow down, baby. You stop crawling around so fast. Why are we suddenly being asked to cater to a baby?

Yet it is even more preposterous to imagine this sign is targeted at the residence’s own driveway, as if anybody could forget they were parking at the home of the famous Guinness world record holder for the longest play session of a human baby. Maybe I’m a guest to whom this baby and its incessant merrymaking will be a baffling surprise, but even then I can’t exactly imagine the baby would be running around outside getting ready to perform an aerial cartwheel in front of my car.

Like are we still talking about a baby? Any child old enough for autonomous play is also old enough to be offended by you calling them a baby. If I run over an actual baby in front of your garage, it’s maybe a little bit my fault for running over your baby, but it’s mostly your fault for placing their fucking bassinet on the driveway, and if anything I have a right to be mad at you because now I have to repaint my car.

The real dilemma posed by the sign is almost too subtle at first. It’s the verb, of course it is. Why playing? Why does the baby need to be playing? What does my speed have to do with your baby’s recreational preferences? Even if we’re allowing that “baby” means “any juvenile younger than 10,” because for some dipshit reason we forgot the word for “child,” it’s distracting to imply that their playing is somehow vital, as if they’re working on a concerto for an upcoming audition. What’s wrong with “Slow Down / Baby Home”? I still wouldn’t slow down, but at least now you wouldn’t have a five-word sign in which you fucked up two of them.

It is also possible that the sign is entirely metaphorical, encouraging one to slow down in life, to take a moment to consider the certain reality that somewhere in the world right now is a smiling cherub at play, and why are we all in such a hurry anyway? I’ve crunched the numbers, and believe it or not this is actually one of the most likely scenarios, or at least the only one that brings any wisdom to my life. But realistically it’s probably just some sort of insurance scam.

7 thoughts on “Slow Down Baby Is Playing”