I frequently see people wearing shirts and jackets with some variation of the phrase “I really don’t care.” This is not only a tasteless attitude to aspire to, but it’s obvious these clothes are little more than wearable comb overs for one’s emotional insecurity.

To be clear, I can’t begrudge a person for their vast museum of insecurities and its accompanying collection of coping mechanisms, as long they’re non-harmful. What rankles me is the brazen misunderstanding of how caring works. As a stranger and therefore a purported member of these shirts? intended audience, I’m personally insulted you feel I have so little grasp of human psychology that I could think this clothing is suggestive of anything other than a roiling neutron star of care. You care so much that I practically care on your behalf, and I definitely don’t give a shit.

Any child old enough to read can intuit that proactively ordering a sassy t-shirt designed to convey a cool indifference is the behavior of a person deeply invested with their perceived emotional state, a person desperate to shield themselves from appearing vulnerable. Meanwhile, other strangers don’t care about you in the first place and they don’t need a t-shirt tell you that. It turns out that when you’re busy not caring about something, you don’t typically feel compelled to race over to Etsy to memorialize your apathy and broadcast it to others. Not caring is one of the easiest pastimes imaginable: you simply do nothing and just sort of let nature run its course. When you find yourself taking any sort of action whatsoever, that’s a pretty good clue you’ve fucked something up.

As ineffective as this shirts may be, I’ve seen enough iterations of them to consider it a trend. Here’s a representative example:

In this case, the customary denial of caring is fortified with an apology that I’m beginning to suspect doesn’t contain all that much contrition. To further reinforce the messaging, the text is written in a breezy lowercase, as if to imply that only caring losers adhere to the Chicago Manual of Style. You’re already wearing a hoodie—I get that you’re not dressing up today. This would be like wearing a tuxedo with the words “I’m a fancy boy!” stitched across the lapel. 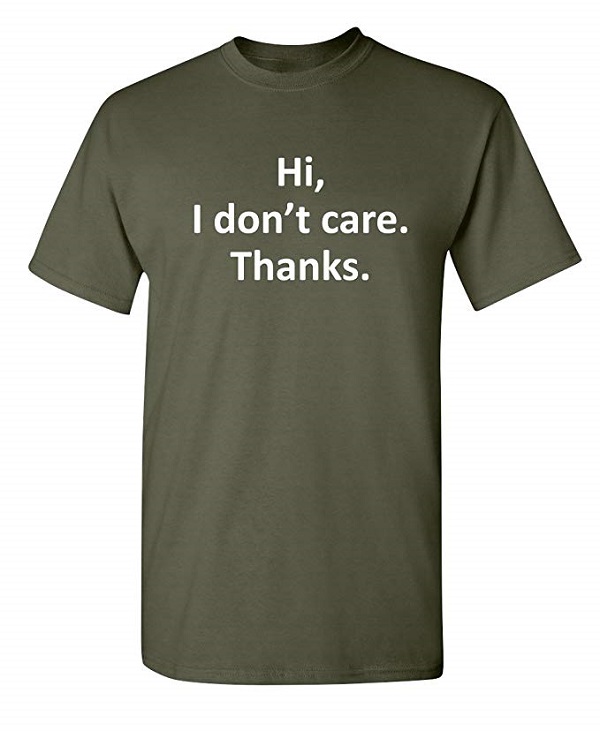 Boom—just like that, we’re greeted, spoken rudely to, and then dismissed with a peremptory thanks. We can’t get in a word in edgewise, if this shirt has any say in the matter. This is the sort of shirt worn by somebody who doesn’t quite grasp how sarcasm works, but who’s pretty sure it has something to do with being polite in a disingenuous way. And while they’ve maybe come up a little short on the biting wit, you have to admit they really hit a homerun in terms of coming off like a dickbag. What’s the point of a t-shirt if not to have a built-in justification for why people dislike you other than your personality? 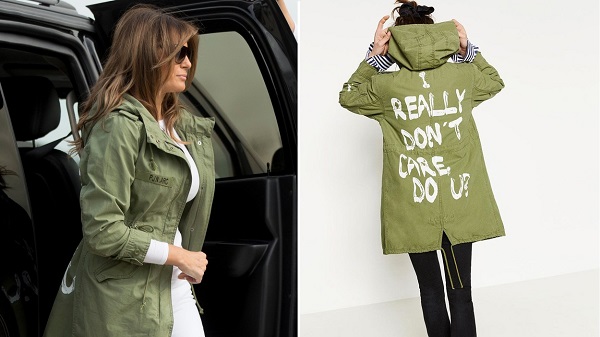 The phrase “I REALLY DON’T CARE, DO U” is the sort of psychopathic shit you’d scrawl in blood on a crime scene when serial killing is getting too easy and you feel like baiting the police a little bit. You’ll note this jacket outclasses previous efforts with a smarmy interrogation, as if now suddenly our own measure of care is on trial here. What are you even asking me, idiot? Care about what? Am I supposed to also wear my answer on a Zara jacket repurposed from a Vietnam-era military tent?

As an experiment, read this jacket out loud and see if you can muster the will power to not punch yourself. It perfectly captures the nasally sing-song voice of a child who is both bullying, and being bullied by, another small child—a heady mix of the pathetic and the hateful. If this jacket were a person it would be Melania Trump.

It’s possible she selected this jacket to advance her carefully curated public image of a sulking prisoner of war, but this is a shitty thing to wear to brunch, let alone to a detention center for children who’ve been forcefully separated from their family. But to be fair to Melania the boutique was probably out of trash bags her size.