It appears as though I’ve missed a few weeks or a year or whatever, but I expect the ’20s to be my most prolific decade in quite some time, with four or even five entries. I begin with this expository essay, in which I will be arguing my long-standing thesis that, if interpreted literally, cereal boxes depict the attempted consumption of cereal by dangerous morons who have no comprehension of how to eat cereal.

This is a striking image, and I’m not going to pretend otherwise—a toothsome eruption of cereal dainties all but leaping off the cardboard in springtime joy, a scene designed to excite our appetites and imaginations alike. Press the play button, however, and the magic quickly dissipates, leaving us with some sad dipshit dumping milk all over his pajama pants. It would be quite one thing if he were just cheekily splashing a little extra milk onto his already-brimming bowl, but the furious torrent on display here seems less calibrated for moistening cereal than dispersing a riot. I recommend easing up on the milk carton if you happen to notice O’s blasting out of your bowl with enough kinetic energy to chip your ceiling paint. 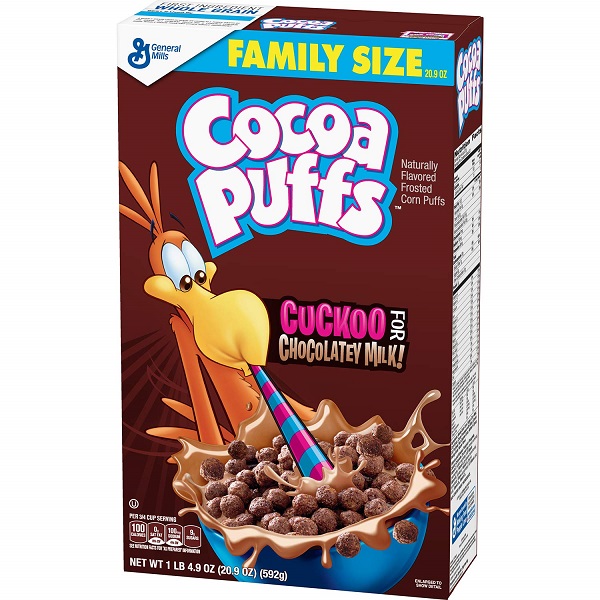 As adults we understand the metaphor implied by Sonny—he’s “cuckoo for” (dependent upon) “Cocoa Puffs” (low-grade crack)—but this concept is happily conveyed without giving him those glassy, tweaked-out eyes and that joyless, insatiable hunger. This is a portrayal of Sonny who society has failed. Even if he were merely drinking “chocolatey milk” from what I’m going to pretend is not a crack pipe, why is milk ejecting from the bowl? That’s not how even the chocolatiest of fluid dynamics works. My best guess is that the Cocoa Puffs Design Team was told to depict Sonny sucking milk, but they misunderstood the direction and just started to suck really badly at their jobs.

Cereal bowls had a good run, but they were really just getting in the way of that gnarly milk-on-cereal action we all demand from our boxes. Just give me one massive slab of Golden Graham, plate it on a bed of milk, and blast it with a pressure washer. Once it gets nice and sodden I suppose we can rip off a chunk and roll it up into a bite-sized ball or whatever, but I’m not really concerned with eating my giant Golden Graham. I just want to see this piece of shit get waterboarded.

The customary legal footnote claims the Golden Graham was enlarged “to show detail,” which might have been a credible assertion had they not blown it up to the size of the Monolith from 2001: A Space Odyssey. This Graham was obviously enlarged for dramatic effect, not to “show detail,” and it feels a little violating to pretend you’ve created this monstrosity for the consumer’s benefit, as if we were all secretly pining to see molecular granularity in our breakfast cereal. I wouldn’t want to see this sort of detail in a fine jewel, much less a Golden Graham, and I certainly don’t need you to wave your gigantic piece of cereal in my face like some sort of breakfast pervert. 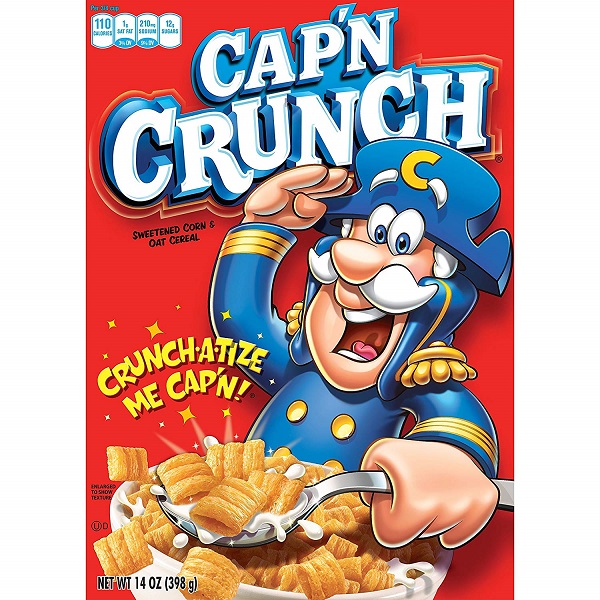 The actually appears to have been a pretty decently prepared bowl of cereal—not a significant feat, but in the world of cereal boxes it deserves some recognition. Everything was looking pretty good up until the Cap’n felt possessed to karate chop his bowl with that ludicrous serving spoon. I defy you to replicate the gross meaty grip on display here. It’s almost impossible to hold a spoon like this, let alone convey that spoon to your mouth without upsetting its contents, and that’s assuming you’re not on an active battleship. Meanwhile, why are you saluting me? Do I outrank a Cap’n somehow? At ease, you fucking idiot.

I realize it’s foolish for an adult to sit around critiquing cereal box cartoon characters, even probable war criminals like Cap’n Crunch, but imagery has a powerful influence, and I’ve had more than a few roommates whose cereal preparation mirrored the reckless gusto depicted on the box of Oreo O’s. I’m not saying your cereal packaging should feature an uptight prick like that Quaker Oats guy, with his patronizing little smirk and sanctimonious Founding Father energy, because fuck that guy. You’re not posing for the $50 bill, bro, it’s just a tin of oatmeal. I’d rather freebase Chocholatey milk with my boy Sonny than listen to another one of the oatmeal guy’s tedious sermons, but then again I feel like I’m detracting from my thesis at this point. One day I’m going to figure out why my essays always devolve into me ragging on the Quaker Oats guy.