Yo! Happy new year! My resolution for the new year is simple: Update eKarjala and post a picture of myself holding a green umbrella inside what appears to be a dorm room. 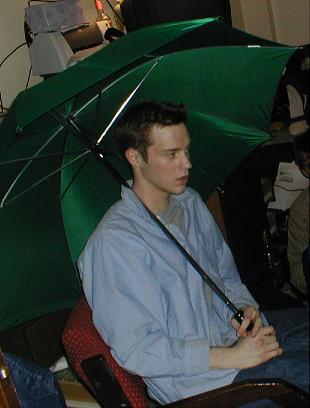 eKarjala has been updated … for this?

I don’t know why I’m beginning to update this site again, or what sort of junk I’m even going to cover, but that feeling of uncertainty is good. I think the reason I’d become so bored with updating before was because the only things that made sense to talk about were the same sort of nonsense I’ve always talked about, and that had become tired inasmuch as it felt required. I don’t like doing things out of necessity–my efforts must come from a genuine, lazy indifference to prove effective. Also, I had to switch from Tripod to this Michigan State server because Tripod is retarded. It’s named after a camera stand! I think that’s bullshit.

The Archives and everything won’t be included here until I find the time to switch them over from my old Tripod space. In the meantime, click on the picture below to download a very special movie I made a few years ago about buying ice cream from ice cream trucks. It’s large, and so I might not be able to leave the link up for very long, but it’s OK for now. Update: Movie no longer available for download.

Despite the ice cream truck door’s warning of children, we didn’t see a single one.

One thought on “Tripod is dumb”