This is a story about the moronic, arbitrary manner in which things become popular on the internet.

Commenter Ueli asked if an old pre-9/11 eKarjala entry about rock/paper/scissors was the ìfirst instance of this quote thatís passed around so much.î The entry in question is an analysis of the old hand gesture game, written in the traditional style of ìinternet rant,î which is where you assume a tone of contrived rage as a means for creating jocularity. Itís as if youíre saying, ìI would like to make some observations about a well-known topic. These observations make me angry! LOL!î You might recognize this tone from 90% of eKarjala.

I hadnít heard of any such quotation being passed around, so I Googled the exact phrase ìI thought paper would protect you.î There were 12,000 instances, each more retarded than the last. From what I could tell, all of them were from a curious rewording of my original idiotic post. Included in the search results was a Digg link to the following image, which was Dugg an ass-boggling 8,343 times: 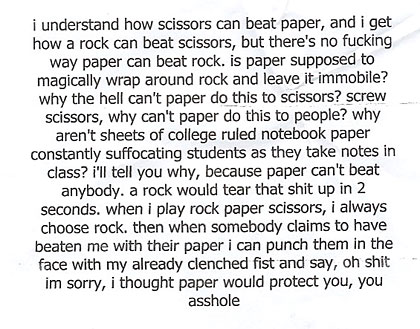 This image was from the website run by Found Magazine, which is an excellent publication that archives all the mysterious notes and pictures one occasionally finds randomly dispersed amongst civilization. So to recap: Apparently somebody printed out an edited version of a 2001 eKarjala entry and left the document lying around in a public location, where it was then recovered by a subscriber to Found Magazine and added to the Found database, from where it was then linked to by Digg and in consequence became parroted on thousands of message boards and MySpace pages. If thatís accurate, this would easily be the dumbest series of events thatís ever happened.

For the purposes of comparison, here’s the original eKarjala entry

I understand that Scissors can beat Paper and I get how Rock can beat Scissors, but thereís no fucking way Paper could beat Rock. Apparently, Paper is supposed to magically ìwrap aroundî Rock, leaving it immobile. Why the hell canít Paper do this to Scissors? No, never mind Scissors, why canít Paper do this to people? Why arenít sheets of college-ruled notebook paper constantly smothering students as they attempt to take notes in class? Iíll tell you why: because Paper canít beat anybody. A rock would tear that shit up in about a minute.

Whenever I play Rock/Paper/Scissors, I always choose Rock. When somebody claims to have beaten me with their Paper, I punch them in the face with my already-clenched fist. Iíll say, ìOh, shit, man, Iím sorry, I thought Paper would protect you. Asshole.

As you can see, it wasnít the most imaginative observation ever writtenóprobably every hacky stand-up has written something similar. Whatís fascinating is that certain instances of the circulating quotation are not just posted anonymously, but instead attributed to Dane Cook or Mitch Hedberg. This is nothing new. The ambiguous origins of anonymous quotations are commonly transposed onto popular figures, even if the quotation is manifestly beneath their actual work, as in this case (even with regards to Dane Cook). People donít trust anonymous sources, and all it takes is one jackass to implicate a specific individual. If this rock/paper/scissors bit is somehow still circulating in a few more years, people will start attributing it to Mark Twain and Oscar Wilde. Eventually everyone will agree that it was originally pontificated by Thomas Jefferson just after he signed the Declaration of Independence, when he updated the ìRantsî section of his GeoCities webpage, ìThomas Jeffersonís little corner of the internet.î

Although this rock/paper/scissors text was circulated on a very small scale, the manner of its distribution is emblematic of the internet as a whole, which insists that certain things be popular, and it doesnít necessarily matter what: a hideous dancing baby, the senseless engrish from an obscure video game, a random 1980s pop hit by Rick Astley. We are so desperate for commonality that any random cultural artifact can become a shared experience, and this is especially true on the internet, which is viral not just in nature but in consequence, making us nauseated from the absurdity. This observation makes me so angry! LOL!

39 thoughts on “I thought paper would protect you”