The other evening I came upon this very troubling two-page print advertisement:

It’s an innocent enough question, but one that would dominate my thoughts well into the night: “Why is this top model giving her friend Pravda Vodka?” My first thoughts were, “Well how the fuck should I know? Is it his birthday?” But then I began to truly study the photo, and that was my mistake. What kind of friends are these, exactly? Why are we being so coy here? The disconnect between the text and the photograph, coupled with the enigmatic headline, gave me what has become a very serious depression.

Here is the second page: 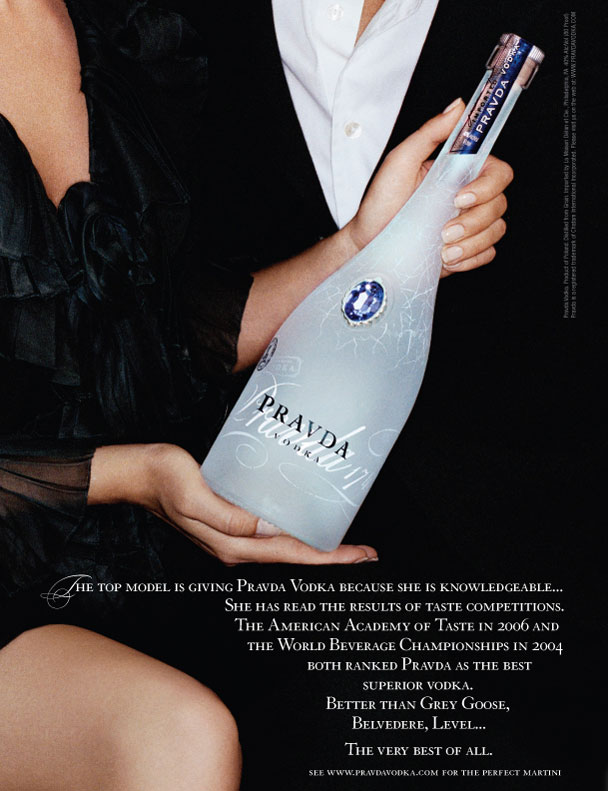 It’s possible that the answer is some kind of joke, that Pravda finds it amusing to sidestep their question with their peculiar, highly-affected text, but I for one am not laughing. Oh, I’ll purchase the occasional bottle of Pravda Vodka because of this advertisement—you’ve won that round, Pravda, if me buying your product was in fact your intent. But if earning my respect was your intent, I would please like to know what this little jerk did to deserve his gift of delicious, world-class vodka—indeed the very best vodka of all.

9 thoughts on “A peculiar vodka advertisment”