Last year I decided to purchase a cat, who I named Pippi. I selected her because she seemed relatively docile and had an endearing appearance. Had I somehow been able to choose a cat based on future personality, I would probably have gone in a different direction. I might have even taken one of those nasty full-grown cats with patches of missing fur and an upper respiratory infection.

Here is my one-year consumer review of Pippi. 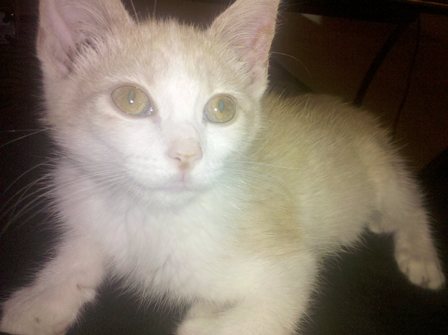 Pippi features a soft orange coat with snow-white belly and paws. Her appearance was the only thing I could wholly evaluate at the Humane Society. All you can really do is find a reasonably cute kitten and hope it doesn’t turn out to be a disappointment. At least with a child, you can justify keeping a shitty one based on the possibility that you failed as a parent and deserve the little miscreant. But cats are essentially programmed with their temperament from birth. Pippi could have been raised by a family of bonobos and would have been more or less the same—maybe better fed, but the same general character defects.

Except for me, Pippi hates everybody she is not outright afraid of, and she is afraid of everybody except for me and my girlfriend Lara. Pippi will walk unprompted up to Lara’s face, hiss, and then saunter off, and then Lara will call her a cunt. The social dynamic in my apartment is like a particularly shitty season of The Real World. Clearly there are jealousy issues at play—from both parties—but there’s no way for me to mediate their disputes, because on the one hand Lara can’t understand why Pippi is so rude when all Lara does is gives her treats and attempt to play with her, and on the other hand Pippi can’t comprehend the English language and is, from a human perspective, functionally retarded.

Pippi’s constant shedding has increased the frequency with which I vacuum to weekly, up from once every other year. Slowly she is clawing the shit out of my couches, which she considers her personal rock climbing gym. In terms of what she brings to the table, I can’t really think of anything. If there was some sort of rodent in the apartment, she’d be the last to know, and once she found it I’m not even sure she’d care. I would probably end up setting out a little food dish for the rodent and consider myself the owner of two equally-worthless pets.

Pippi is occasionally affectionate, but usually only when her food dish is empty. Consequently I prefer to leave her food dish empty all the time, just so she has to be kind to me. If she’s especially friendly, almost acting like a normal cat, I feel instantly guilty, because I know it means I’ve not fed her in several days.

Pippi does not usually tolerate me picking her up, despite the fact that I’ve been picking her up from day one and it is my preference to have a cat who I can tote around the apartment. I just want to occasionally hold her in my hands, mind you—it’s not like I’m looking to put a baby’s bonnet around her head and wheel her around in a stroller. But Pippi is obsessed with having her own personal space. She is not a lap cat, except for once in a great while when she burrows herself on my person as if to taunt me with the fleeting sensation of owning a respectable cat. I’ll enjoy this arrangement for a few short minutes, and then mournfully get up to replenish her empty food dish.

I would not recommend selecting a cat from Pippi’s genetic lineage, or even a cat with her color scheme, if such a thing isn’t considered cat racism. All I wanted was a mellow lap cat who could entertain herself if I had to go away for a couple weeks now and then, but taking care of Pippi is as fulfilling as owning one of those electronic Tamagotchi pets. For a few weeks you’ll feed her and hope she doesn’t die, but once the novelty wears off you’ll want to forget about her completely. But it’s not ethical to forget about my cat, and the Humane Society’s return policy is practically non-existent. So my only option is to just resign myself to 12 years of mediocre cat ownership—or at least hope that as Pippi ages she becomes less of an outright asshole.