My idea to update everyday in January was a spectacular failure. Now that my promises have become less valuable than a gypsy’s, I will attempt to redress my tarnished reputation by updating more or less every weekday for an unspecified unit of time.

As a reward for lying to all of my visitors, I’ve been receiving a powerful influx of traffic. As best as I can gather, on Friday, January 25th, the version of my Internet ’96 article that’s hosted by MSU was posted by a karma-seeking reddit user, who amended a superfluous extension to the URL so as to represent a new submission. From there it appeared on such places as Fark, Gizmodo, and MetaFilter, and on Saturday the 26th it was made popular on Digg.com and received the most Diggs that day, which had evidently been the dullest 24 hours in internet history.

My MSU website is basically a dumpster baby, but because that version of the Internet ’96 article was still generating traffic, about a year ago I loaded it up with ads, including an incongruous mid-article in-text offender. The lesson here is that the best way to generate traffic is to stop creating new content and load up previously-circulated articles with unsightly advertisements. That’s what this web 2.0 bullshit is all about.

Here’s the specific traffic information for the abandoned MSU version of eKarjala: 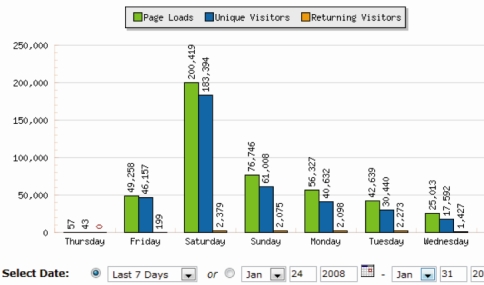 Note the slight increase in traffic my article received from Thursday to Saturday. If you were to stack Saturday’s 183,394 unique visitors end-to-end (and I have), you could reach our Lord and back seven times—with enough people left over to form 4 different ice hockey teams, including a Zamboni driver.

A few of my other articles have been receiving some shrapnel traffic from StumbleUpon, so I’ve added a “recent comments” plugin to the sidebar, which will help draw attention to the latest person I’ve somehow insulted. Also, I’ve switched this site’s font to Verdana, since people kept calling me a “serif font fucker.” However, I’m still considering changing the font back to Times, because I get off on making my webpage look like garbage.